Galerie Maria Wettergren is proud to present the exhibition: “For The Love Of Detail ” by Danish designer Ditte Hammerstrøm. Considered as an important pioneer of the renewal of the Nordic design scene, Ditte Hammerstrøm has her own design studio in Copenhagen since 2000, and has received several prestigious prizes such as the “Walk The Plank Award” in 2008 and the “Finn Juhl Architecture Prize” in 2011.

Ever since her graduation from the Danish Design School in 2000, Ditte Hammerstrøm has been introducing an overtly feminine approach to design, challenging the, at the time and partly still, rather male dominated design field. Her point of departure is the detail.

Can decoration constitute the core? Can a detail be the main thing? This seemingly paradoxical hypothesis forms one of the main pillars of Ditte Hammestrøm’s design. The exhibition focuses on the role played by detail in the creation of form and emotion, and the works are revealing the importance of detail, not as a superficial adding to an already existing structure, not as a static ornament to a given form, but rather as a trigger of new shapes, functions and emotions, in the process of the making.

Here, an important technical device, and a red thread so to speak, is the string. The plastic string is already present in her earlier works such as the Bistro Light (2005). In these works, the string is boldly visible and serves both a technical purpose by fixing the foam and the fabric to the structure in a rather raw yet sophisticated way, and a more imaginary purpose, revealing a phantasmagorical universe with playful connotations, such as in Bistro Light where the lacings strongly recall a corset, only this time, it is not the female body being tamed, but the upholstery.

The string is equally present in her three latest work Interacting Daybeds (2014) in three parts that can be combined in different ways, working either together or separately, as daybeds and/or tables. Each part focuses on rhythm and patterns made by repetition, and here again, Ditte Hammerstrøm is experimenting with sculptural new types of upholstering, such as a sitting surface made of 203 foam balls, each covered one by one with lavish mohair fabric.

This extreme attention to detail and the quest for perfect craftsmanship, so perfect that it can transcend even poor materials, is equally striking in Bunch of Boxes (2008). In this sculptural hanging cabinet, Ditte Hammerstrøm has removed the back, front, top and legs of a traditional storage furniture, keeping only the essential – the storage spaces – with 10 boxes in various sizes hanging from the ceiling in black plaited ropes. Ditte Hammerstrøm has covered the MDF boxes with a thick luxurious lacquer, raising this traditionally cheap material to a hitherto unknown level of nobility.

We find another example of amazing detail attention in the works Wall Stools (2006) and Small Tall Stools (2007) where the perfection is even greater underneath than on the top of the stools. This haptic dimension with invisible details, that can be felt with the fingers more than seen with the eyes, is a true reminiscence from the Danish golden age of beautifully crafted design, but it equally recalls the Japanese crafts tradition. The serial element is a current motif in Ditte Hammerstrøm ’s work. The focus on repetition, pattern and rhythm becomes evident in her works “Out of Focus”, chair (2010) and bench (2014), in which four archetypal chairs in white lacquered steel are blending into one, creating an optical illusion of blurriness, making it difficult to determine where one chair starts and another one finishes.

Ditte Hammerstrøm ’s design is conceptually strong and her approach to design often been likened to that of an anthropologist. “Furniture tends to group in homes through their specific function, Ditte Hammerstrøm says. The easy chair finds the floor lamp, the sofa finds the coffee table and the dining table the dining chairs”. Ditte Hammerstrøm is tearing these structures apart, allowing similar types of furniture to form new patterns and new possibilities of story telling, growing from the detail to the whole. Form follows detail? 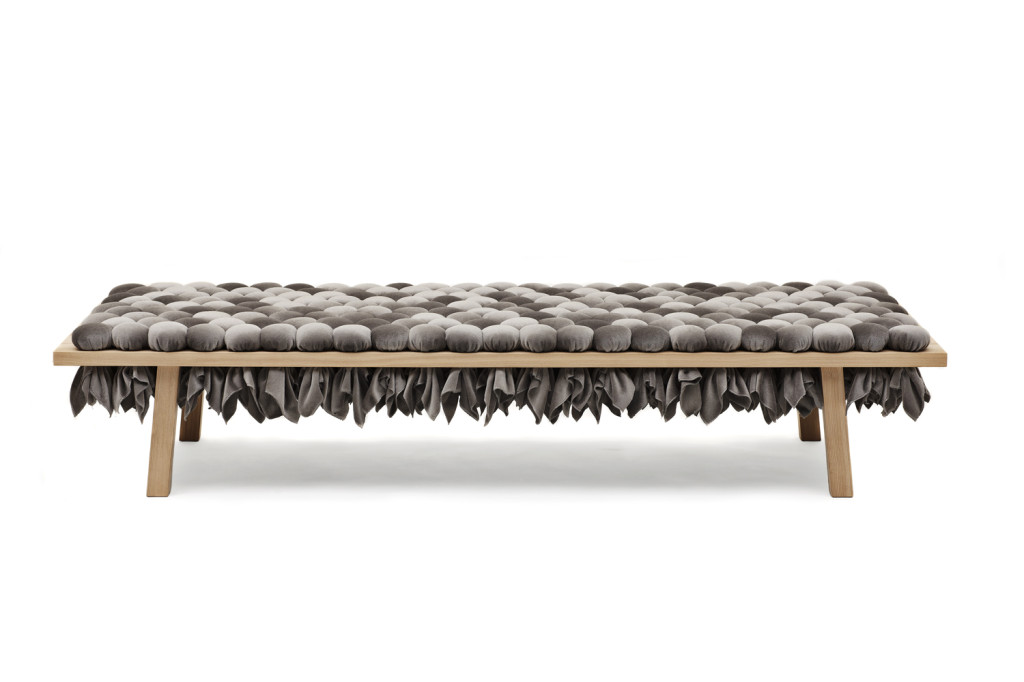 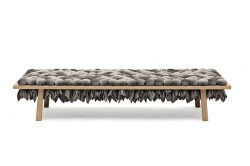 Side by Side / Low Mohair 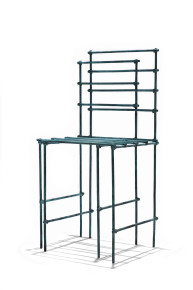 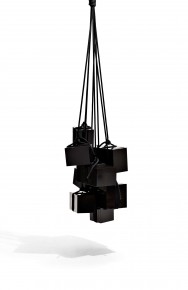 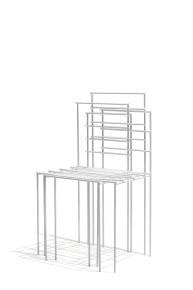 Out of Focus / Chair 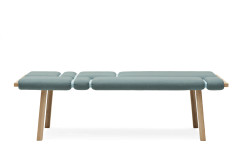 Side by Side / High Wool 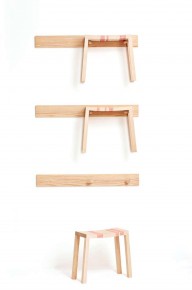 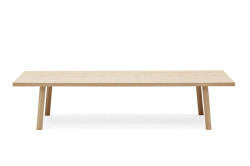 Side by Side / Table bench 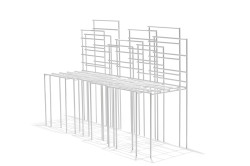 Out of Focus / Bench