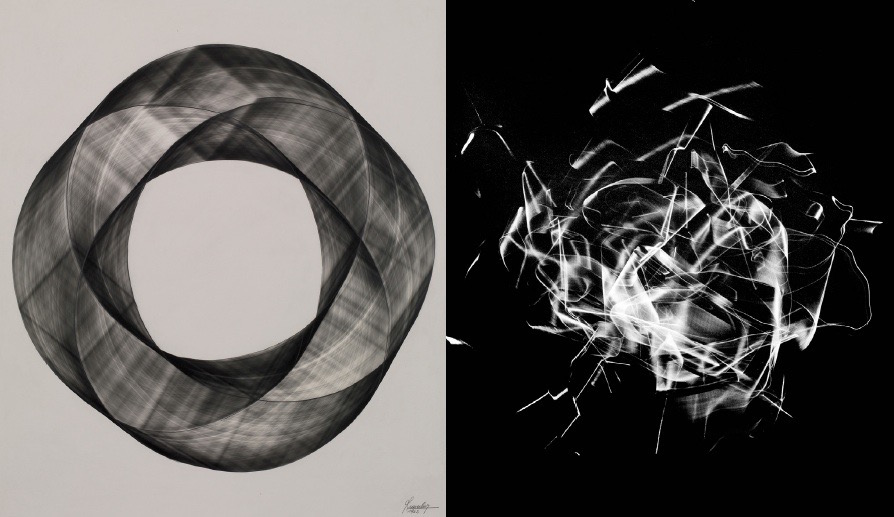 With Trajets de lumière, (Paths of Light) Gallery Maria Wettergren is proposing a yet unseen dialogue between two French artists dealing with kinetics and photography: Rodolphe Proverbio (1938) and Etienne Bertrand Weill (1919 – 2001). A choice of Métaformes by Weill, of Peintures à la lumière (Light painting) as well as l’Esthétique de l’eau (Aesthetics of water) by Proverbio that offers the possibility to feel the richness contained in the synthesis of arts, the interdisciplinary practice and, above all, is proposing the spectator to dream, to think or simply to look at, as each one may wish.

In 1963, Rodolphe Proverbio comes and shows its first light and optical creation to the twenty years older Etienne Bertrand Weill who encourages him to keep on making this way. Since 1957, the later is exhibiting his « métaformes », born from the research he has started in 1946 to render, in one only still photograph, the atmosphere of a scene (mime, dance and theatre).

Each of them will go his own way, eventually meeting while exhibiting and in particular in the frame of « Libre Expression » (Free Expression group).

To create the images they wish to obtain, both artists conceive and build « generating tools », which do not explicitly appear (RP) or disappear (EBW) in the final work. Both submit them to motion, in other words they introduce time (duration) in the photograph. This hand-made stage adds to the aesthetics and poetry of the result a character of uniqueness, whose absence has long stood in the way of photography to be recognized as art.[1]

The writing of the Métaformes reminds of stage direction: the performer is a space located mobile lighted by one or more sources, which are revealed when and only the mobile’s material is offering its surface to reflect it.

Using perforated boxes, or other objects, filled with light, Rodolphe Proverbio is weaving light threads through dance-like gesture, which implies the body as a whole. Like a blind-made calligraphy, the design is made in a flawless darkness.

If the later is writing with incident light, the first one is playing with reflected light. Does it mean that their thoughts and inspiration are opposed one to another? Not really because both are creating visual score, which is dialoguing with music, like Iannis Xenakis Polytope, for instance.

This approach shows how fruitful can be the relation based on the synthesis between technique and art (architecture, painting, photography). Xenakis, an architect became a composer just like Proverbio, an engineer became a photographer. On the other side, Weill, a photographer by reason, musician and painting lover, carried research on the physics of solids.

As a stage photographer, Weill was looking to catch the last moment of the unbalanced, this very moment leaving space for the audience to doubt. While replacing the body by his generating mobiles (abstraction), the photographer express his will to offer an image, which does not impose anything but, instead, make it possible to project its own dreams, thoughts, …

When he is leaving open the lens for a longer pose, Weill shows an event ; on stage, he makes his choice after having it identified during rehearsal ; for the Métaformes, he is creating it from the very beginning, just like Proverbio moving his objects-tools.

Through the introduction of the duration in a still image, the artiste is revealing what we do not see, a trajectory or, in other words, an object in its becoming and its evolution.

This is the phase in which forms are in gestation in the water, still not precises but loaded with the energy that will let them bloom; such are the words of Rodolphe Proverbio, speaking about a series of work he started in 1967 whose subject is he calling The Aesthetics of Water : photographs of geometrical an simple elements shot through a lens filled with water.