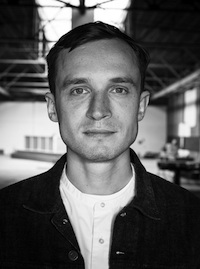 Born in Riga, Latvia in 1985, Germans Ermics studied design in Denmark and went on an internship at Rasmus Koch Studio in Copenhagen where he developed his skills in graphic design. In 2007, he co-founded the Latvian culture magazine Veto, serving as art director. At the same time he began studying at the Design Academy Eindhoven, in the department Man & Living, where his primary focus was on furniture and interiors. Prior to his graduation in 2011 he completed an internship at Studio Robert Stadler in Paris. During the next two years he was working on diverse interior and graphic design projects for both Dutch and international clients. In September 2014 he started his own studio in Amsterdam. He often employs his graphic design background to add a new and fresh approach to design and enjoy experimenting with different materials and perceptions of space.