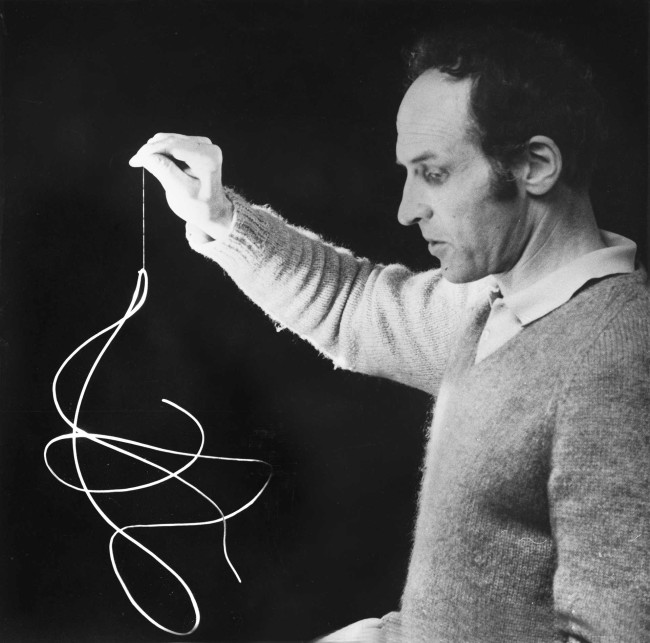 “… we can imagine that the film wouldn’t have the time to grab the object’s contours any more. A static aspect is replaced by a new image; crystallization of an object’s movement in space and time. All that remains from shape is a new transient appearance; métaforme is the name, which seems to best define it. Its medium is photography”. (Etienne Bertrand Weill in Aujourd’hui, art et architecture, 1962) » 1

E.B. Weill’s pioneering work holds an important place in photographic art’s history, as we are reminded through the retrospective organized by the French National Library in 2012 (Vertigo of the Body), all the previous individual or collective international exhibitions and projections of the « Music for the Eyes ». His works can be found in museum collections in France (Pompidou Center, Museum Reattu, French National Library), in USA, Canada, UK, Germany and Israel.

EB Weill, a member of the Resistance – and a French freedom-fighter, graduated in 1938 from the National School of Photography and Cinema (Vaugirard). It was only in post-war France that he begun his artistic journey: his first period is dedicated to humanist subjects and to architecture. In 1947 he encountered Marcel Marceau through whom he entered the world of performing arts. His wide palette included theater, dance and mime. He formed close working relationships with artists such as Hans Arp, Jean-Louis Barrault, Etienne Decroux, Laurent Terzieff, Maurice Bejart, becoming for many of them their favorite and sometime exclusive collaborator.

His attempts to suggest the energy and dynamics of the stage in one still image led him to personal research and creation: the Métaformes. In 1957, he started building mobiles, made of simple materials such as wood, glass, plexiglas, wire. He studied and conceived them specifically to generate certain families of images that he obtained by submitting these mobiles to simple or complex movements and miscellaneous lights.

« Of course, my first film was bad but I realized that I had touched something fascinating and probably inexhaustible. »

According to Jean-Claude Lemagny, then curator at the photographic department of the French National Library … « it’s about a preparatory elaboration of the « being photographed » – … Etienne Bertrand Weill invented « abstract » images through the fabrication of mobiles, which being animated in front of the camera results in beautiful imaginary volumes, illuminated bodies in a dark skin. » E.B. Weill knew how to push the limits of his art without trespassing them. Before him, Etienne Jules Marey, Eadward James Muybridge, Norman Mac Laren had explored the movement but Weill, through patient, quasi scientific research, provided photography with a lyrical, rich and experimental vocabulary.

« it’s true, science came and took over from magic and, with help from this science that can be a subject of concern as well of hope for human beings, artists have to try to comprehend tomorrow’s world »

With his audiovisual work, the « Music for the Eyes », the photographer searches further the correspondence between music and pictorial art. The constantly evolving artist participated in the development of the Gesamtkunstwerk (total art). He was ahead of his time in how he sensed that projections can become stage set and even characters themselves.

He invented a new kind of photography, born from the confluence of sound and light, matter and movement.
« Like music, métaformes are elaborated out of a repartition in time and space of miscellaneous vibrations or modulations. When an object is moving during a certain period of time, it generates a modulation that the camera makes perceptible to the eye. This modulation turns to an object and creates a succession of modulations, which become like elements of a visual music, through their sequence, metamorphosis, oppositions, fugues, breaks, rhythms, etc. »

1 quotations are from Etienne Bertrand Weill