With the exhibitions DIALOGUES, Maria Wettergren proposes a mise en scene of the aesthetic encounter between two artists. When the artworks of Tora Urup and Eske Rex meet, the dialogue between them is floating and dreamy, yet intense. Gravity seems overruled, while optic illusions are triggering our mind.  DIALOGUES is the first in a series of exhibitions investigating the aesthetic exchange between two artists.

Tora Urup (born 1960) is an artist specialized within the fields of glass and ceramics. She started her career working with ceramic art in Tokoname, Japan in 1982-83, after which she studied glass and ceramics at the School of Applied Arts in Denmark. In 1994, Tora Urup graduated from the Royal College of Art in London and subsequently returned to Denmark to collaborate with Holmegaard Glassworks and Royal Copenhagen porcelain, after which she opened her own studio. Her glass sculptures have been acquisitioned by both private collectors and museum collections such as The Museum of Art and Design, Helsinki Finland; Design Museum Denmark; MUDAC (The Museum of Art and Contemporary Design), Switzerland; The Craft and Design Museum Reykjavik Iceland; Coburg Glass Museum, Germany; Kunstforeningen af 14 August, Denmark; and the Glass Museum, Ebeltoft Denmark. In 2014, Galerie Maria Wettergren held the solo exhibition “Seeing Is Forgetting The Name Of The Things One Sees”.

Tora Urup has since 2001 shown a particular interest in exploring the visual effects obtained within a series of circular glass sculptures in vibrant colors of thin opaque and thick transparent glass. This body of work is reflecting Tora Urup’s investigation into the specific role played by color and material in our perception of volume and space and reveals the artist’s interest in altering archetypes like the glass bowl into dreamlike objects. By combining subtle colors and making them interplay with each other by varying the glass thickness, Tora Urup enables new spatial perceptions that reverse our conventional understanding of the traditional glass bowl. The interior volumes of these trompe-l’oeil sculptures seem to float independently of their exterior, and by the careful juxtaposition and treatment of cut and polished surfaces, Tora Urup is creating a genuine illusion of a seemingly infinite and liquid space inside a physically restraint volume. What we thought was solid is void whereas what looks hollow is actually massive. The visual impact is considerable as these pieces stimulate and sharpen our senses and make us question what we are actually looking at.

Through the years, Danish artist Eske Rex has developed a body of work where practices from architecture, art, design and craft are intertwined and unfolded within sculpture and installation. The works of art stem, despite their clear and ethereal expression, therefore from a more complex origin. They often take their point of departure in one or two main materials, that are worked to the limits of their inherent ability; fabric is stretched and wood split to the point of breach and their primary characteristics are laid bare in the demonstration of the condensed definite matter. Simple and stylistic, they are cleaned and processed of excess elements in order to concentrate on experiencing the materials of which the works are made. For the same reason they give what can be referred to as a found poetic silence in their presence. The works are carried both by a conceptual idea and by the materials and the craftsmanship, and they are decidedly discursive in their analogue and apolitical statements. Works such as Unfolded Plank, Vorschub and Pull are pieces in series that examine the effects of force caused by tension between materials and space. They are overextended, stretched, split and placed on the verge of collapse.  There are no stated explanations – all transfer of information happens on an aesthetic and sensuous level. The traces of craft and the attention to materials sensuously combine the tangible and near with metaphysical, essential and universal matters. The simple materials reflect universal states of mind and situations and link the piece to a metaphysical world, while the craft’s distinct imprints open up for a present and intimate character.  Motion is essential in Rex´ works. Even motionless sculptures such as Tensioned Wood have a shape and a material that animate the surrounding space. The work has a strength which gives it an identity, an own-ness. The traces of design are from time to time seen in the character of the works as objects, while the element of architecture is visible in their spatial orientation. The functionalism is toned down in Rex’s work, and the laws of physics and its founding effect on our universe are the governing principles. Gravity, magnetism, friction and the mathematical principles are explored in series of works such as Measuring Space and Divided Self. They investigate the effect of forces and the dynamics between the individual components of the piece and the variable element: the visitor. This is for example seen in Space Meter in which a wooden trumpet with an embedded magnet is suspended by a string fixed in a wall and the attraction of the magnet against a hung metal-plate on the opposite wall. The trumpet hovers a few centimeters apart from the metal-plate; vibrates with the visitor’s movements in the space and threatens to loose the magnetic connection to the wall and fall to the ground. The feeling of a point of breach is caused by an almost electric field which creates a sensibility and attention towards the objects in the space. Rex shares traits with some of the modernist artists by a mutual focus on simplicity in the choice of materials and themes and an abstract idiom which outlines universal figures and only in few cases with references to existing known shapes, as for example the bird in Constantin Brancusi’s sculpture or the mask in Rex’s Divided Self. A classical sculpture represents something. Eske Rex more often presents something. As with Alexander Calder’s mobiles in metal, Rex shapes movement, gravity and force as well as he forms the material, and the material becomes a means to frame and activate these force effects. Rex prolonges a minimalist tradition in which the inherent characteristics of the materials are partaking in the aesthetics. While Brancusi is the sculptor who carves images out of the materials, Rex shapes the sculpture without the weight of the mass. Both have an inherent movement in their objects. Where Rex is working with the framework and Brancusi with the massive body, it is in the compositions essential to see Rex’ work in relation to the poetic shapes of Calder’s mobiles. (Excerpts from Nina Wöhlk’s text about Eske Rex, 2015) 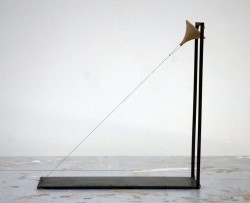 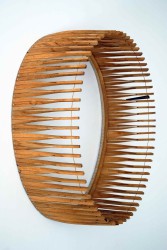 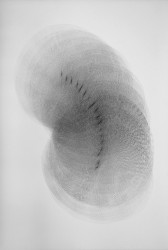 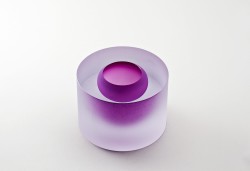 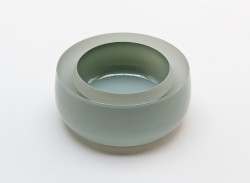 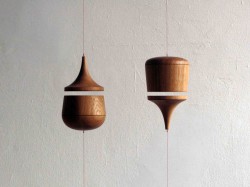