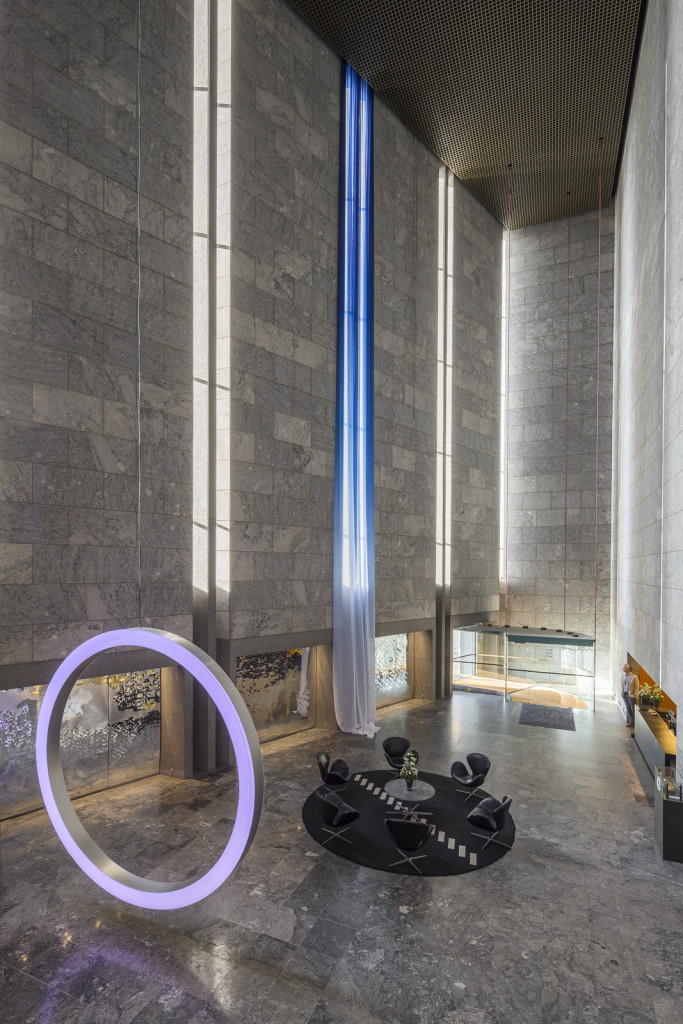 THE HONORARY GRANT OF THE NATIONAL BANK OF DENMARK (DANMARKS NATIONALBANKS JUBILAEUMSFOND) IS AN ANNUAL HONORARY PRIZE ATTRIBUTED TO A DANISH CONTEMPORARY ARTIST. IT IS CONSIDERED AS ONE OF SCANDINAVIA’S MOST IMPORTANT AWARDS WHICH, BESIDES A GRANT OF 400.000 DKK (c.a. 53.000 EUR) OFFERS AN EXHIBITION IN ARNE JACOBSEN’S ARCHITECTURAL MASTERPIECE FROM 1965.

The exhibition is made through an intimate dialogue with Arne Jacobsen’s architectural gem from the 1960s, and the encounter is very powerful and visually striking. Jacobsen’s strict, yet sensual, modernist architecture with its immaculate grey Norwegian Porsgrunn marble walls and narrow light wells in the majestic 20 meter high lobby, not only embraces like a cathedral the soft and floating, almost immaterial, light works. The architecture is undergoing a constant transfiguration, as Krogh’s sculptures and textiles delicately illuminate the surrounding room. By reflecting and modulating the spare daylight, they create a metamorphic, ever-changing space based on the rhythm of natural daylight.

The exhibition “Flux Luminous” is in the words of the artist an invitation to meditate on the flux of life. In “Sky Curtain”, the daylight is delicately filtered through the deep blue prism of the gigantic curtain, moving subtly from blue to white in a dramatic 20 meter fall from ceiling to floor. The curtain, leading the mind to both the sky and water, softly vibrates in the space with its featherweight silk and forms a soft contrast to the massive, mineral walls. 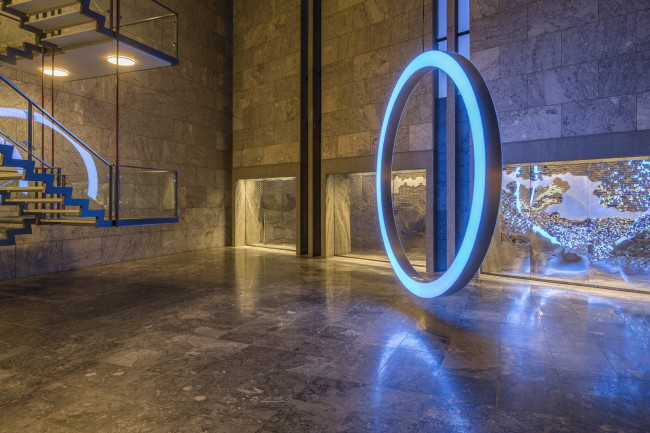 Sparkling like a giant precious ring, the 3 meter circular mobile “Skylight” is suspended from the ceiling, lazily turning while echoing the natural cycle of the sky from dawn to dusk. There is a feeling of something unreal, like time or gravity suspended when looking at this big silent object floating right above the floor level like in a Matrix movie.

“Cloud Illusion” forms the third component of the exhibition. Made of engraved and perforated polished aluminium sheets, these panels unfolds in space like large clouds of ever-changing character. The interaction with the ambient daylight is strong and subtle with beautiful light reflections spreading over the floor throughout the entire room.

While working on “Cloud Illusion”, Krogh was inspired by the soulful piece of music “Mirror in Mirror” by the Estonian composer Arvo Pärt. “Flux Luminous” poetically refers to the infinity of images produced by parallel plan mirrors: the tonic triads are endlessly repeated with small variations, as if reflected back and forth.

The liquid looking surface combined with the calligraphic engravings and the vertical format may equally recall the spirit of the Chinese monochrome wash drawings from the Sung Dynasty, in which the idea of capturing the pulse of life and nature by means of only one colour is essential. Here, however, colour is no longer added and life is no longer imitated, they are reflected and modulated. 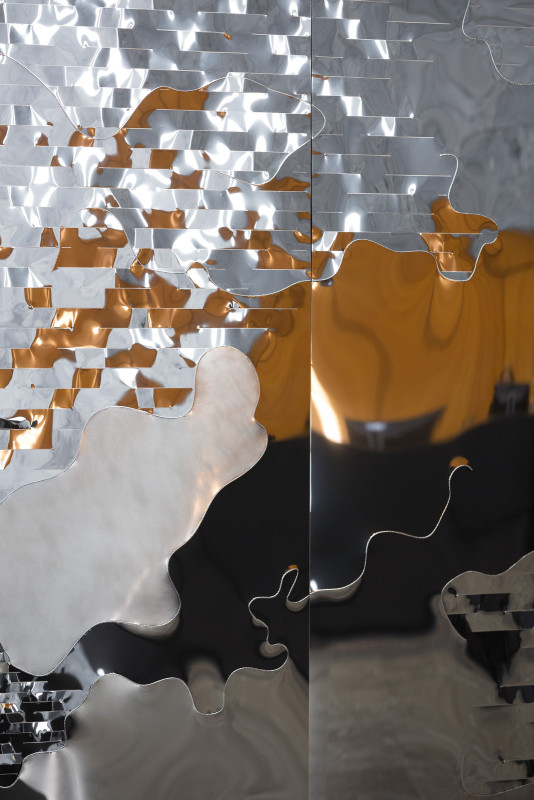 With its interesting dialogue between linear and curved, static and movement, matter and light, the exhibition is orchestrated like music and possesses the dramatic power of an opera. Krogh has managed to create a synthesis of the arts, a Gesamtkunstwerk forming a bridge between the past and the present, architecture and sculpture, in her pursuit (shared by Jacobsen) of an all-embracing art form.

Astrid Krogh, born in Copenhagen in 1968, is widely considered as an important artist in the field of site-specific textile art and light sculptures, and her works have been exhibited worldwide in international exhibitions, fairs and museum shows. She radically innovated the field of textile art by the end of the 1990 with her monumental optic fibre weavings and neon installations for important museum exhibitions and site-specific commissions such as the Maersk building and the Danish Parliament in Copenhagen. Her large scale site-specific works can equally be found in the 21 C Museum International Contemporary Art Foundation in Cincinnati and in the Longchamp Flagship in Paris. In 2006, 2009 and 2011 she received the Danish Art Foundation Prize. She won the Thorvald Bindesboell Medal in 2008 and received the Inga & Ejvind Kold Christensen Prize in 2013.

The exhibition will be held from October 29 – November 25 in the Danish
National Bank, Copenhagen
Havnegade 5, 1093 København K, Danemark